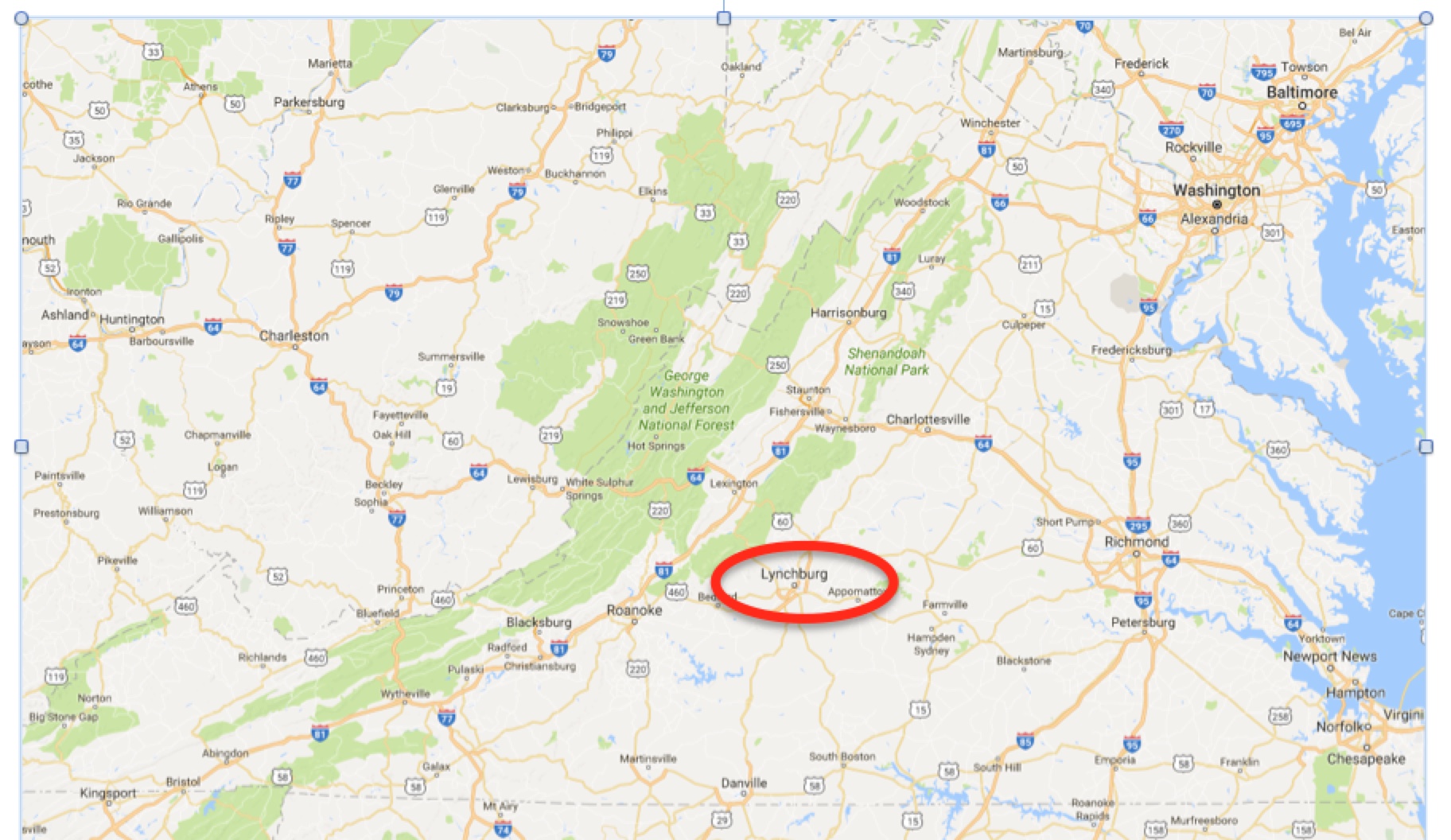 I’m working on the finishing touches for my alternate world, science fiction novel, My Soul To Keep. Recently, I looked back to see what had been my inspiration for this story. There are many inspirations that fed my imagination as I wrote, this particular one was an inspiration on location.

I had a number of ideas that weren’t quite coming together into a story. Book research was endless and unhelpful. I was fortunate enough to be able to extend a business trip and travel through the area where much of the story takes place. There, I came across the marker entirely by happenstance. Well, sort of.

The story I had in mind took place in an America that never was, but could have been—with a little help from the imagination. For the story, I needed to find a place with a history strongly influenced by conservative to fundamentalist Christians. I chose Lynchburg, Virginia because of its history and its notable citizen, Jerry Falwell. Now, this is not to say I disapprove of, or approve of, Mr. Falwell (who is a whole ‘nuter subject) but I approved of Lynchburg.

Lynchburg sits on the western edge of Virginia, in the foothills of the Blue Ridge Mountains and along the banks of the James River. It’s both a quaint and a modern town with a rich history. Known as the “City of Seven Hills,” the town offered picturesque sites for interactions between my characters. I walked all over town. I dictated tons of notes and took pictures but this was in the day before digital and alas, those are gone.

I’ve used a fictionalized version of the city’s beautiful and moving Monument Terrace in the novel. I did not have the time, nor many opportunities, to meet more than a handful of the citizens of Lynchburg. None of my characters are fashioned after any of that city’s living or dead residents. But I digress.

The historical marker is not in Lynchburg, but a neighboring town called Madison Heights. I was leaving Lynchburg on my way to my business obligation when I spotted the marker. Its header reads “Central Virginia Training Center.”

“Established in 1910 as the Virginia State Epileptic Colony, the center admitted its first patients in May 1911.” You can see the marker here.

The buildings and grounds were very close to an image that had been floating in my imagination. I was distraught that I hadn’t discovered the location earlier in my stay. But I was in luck. The Central Virginia Training Center has worked hard to overcome its dark history but it doesn’t deny its history. I admire the administrators for making that decision.

I wasn’t able to do much more research on the remainder of that trip, but since then I’ve delved deeply into how America once treated its “misfits.” I learned of heartbreaking institutionalization of persons who were different, of forced sterilizations, of Better Baby Contests, and an American program of eugenics.

I am grateful that our society, our country, recognized the wrongness of those programs. Changes were made, some programs continue but in a better way. Some programs, thankfully, died.

These were things my high school history books had barely touched on and glossed over. These were stories that struck a chord with me. These are stories that I believe need to be remembered by every American. Not to shame us, but to inspire us to be better. Not like Better Babies Contests aspired for humans to be better, but to be better human beings, to make better decisions for the future.

Have I tickled your curious bone? Stay tuned! Over the next few more, I’ll discuss the American program of eugenics, the Better Baby Contests, and more inspiration on location—sort of.

4 thoughts on “Inspiration on Location”