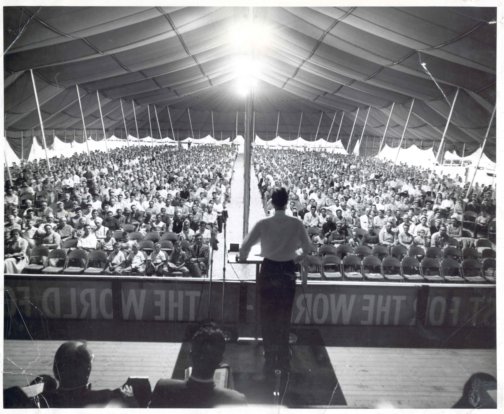 During each of these periods of Awakening, there were widespread revivals led by evangelicals The phrase “Great Awakening” refers to all the periods collectively. The term Awakening refers to the awakening of interest in religion.

Revivals were a series of religious gatherings. They lasted from three days to a week or more. Meetings would happen in the same location at the same time every day or evening. At these meetings, the evangelist preached of fire and brimstone and redemption. In the American South revivals were commonly held in tents through the summer months. In the northern states, halls and auditoriums were rented. Some areas and denominations continue to hold annual tent revivals to this day.

Thousands attended these revivals. The evangelists produced a profound sense of conviction and redemption among believers. The Fellowship in my novel, My Soul to Keep, was created with this history in mind.

Up for debate is whether a Fourth Great Awakening happened during the 1960’s and 1970’s. Experts disagree. Air-conditioned megachurches and televangelism were more popular then than tent revivals.

A period of lower interest and sometimes disillusionment followed most of these Awakenings. Readers over a certain age likely remember one such period. Anyone remember Jimmy Swaggart and Jim and Tammy Fae Bakker?

You can download the quiz here: The Great Awakening Quiz

The answers to the quiz can be found here: The Great Awakening Quiz Answers

How did I first become aware of the Great Awakening? Family history. Plus, I attended some tent revivals as a child. In time, my immediate family’s religious beliefs veered away from the ultra-conservative. I’ve gone a bit further away than that. But let me make it clear, I am not against any religion conservative or not. I wrote a dystopian novel about abuses of religion and government. Abuses that I fear.

So, how did you do on the quiz? Anyone get 100%? Let me know your score in the comments below.

4 thoughts on “Inspiration from Fire and Brimstone and Redemption.”